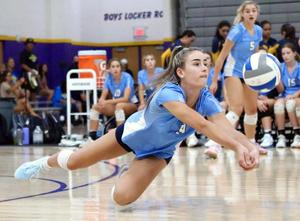 She is the third Skyview volleyball player to be chosen for this prestigious award.

The award recognizes excellence in athletics, academic achievement and exemplary character on and off the court. Alex is now a finalist for the prestigious Gatorade National Volleyball Player of the Year, to be announced later this month.

Acevedo is a 4.0 GPA student who has volunteered locally on behalf of multiple charitable organizations, including the Family Access Network and the U.S. Marine Corps Toys for Tots program, and she will serve as a buddy/mentor for her brother this year at the Idaho Special Olympics.

A press release from Gatorade noted that she led the Hawks (22-5) to their third consecutive 4A state championship this past season, recording 339 kills, 151 digs and 33 blocks, posting a .400 hitting percentage on the attack. She was named Idaho’s 4A Player of the Year by coaches in the state and is rated as the No. 13 recruit in the Class of 2024 by PrepVolleyball.com.

Alex will graduate early and has verbally committed to play volleyball on scholarship at the University of Oregon this fall.