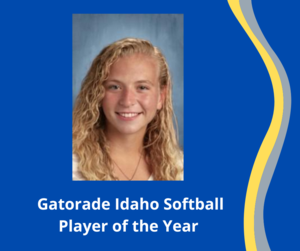 The Gatorade Idaho Softball Player of the Year award recognizes athletics and character.

Recent graduate Delaney Keith of Skyview High School has been named the Gatorade Idaho Softball Player of the Year for the second year in a row.

The award, which recognizes not only outstanding athletic excellence, but also high standards of academic achievement and exemplary character demonstrated on and off the field, distinguishes Keith as Idaho’s best high school softball player. Delaney now is a finalist for the prestigious Gatorade National Softball Player of the Year award to be announced in June.

The 5-foot-9 shortstop led the Hawks to a 30-2 record (16-0 in the Southern Idaho Conference) and the 5A state championship this past season. Keith batted .596 with 51 RBI, 13 home runs and a state-best 73 runs scored. She struck out just four times and stole 18 bases on the season.

Keith has volunteered locally as part of multiple community service initiatives through her church youth group. She also has donated her time as an instructor for youth softball players.

“She can hit the ball hard regardless of its location,” said Owyhee High School head coach Tess Martin. “Looking at her spray chart will show you that she hits the ball hard to any part of the field.”

Keith maintained a 3.86 GPA. She signed a National Letter of Intent to play softball on scholarship at Coastal Carolina University.