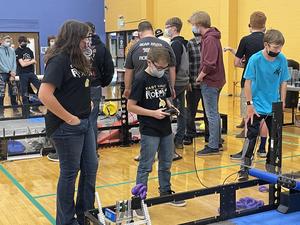 After 43 qualifying matches, EVMS teams were ranked 4th, 21st, and 33rd. The top 32 teams went to the playoffs.

In the playoffs the Cookie Monsters (Isaac Merrill, Tristan Bent, and Jacek Wang) and the Annihilators (Jake Meyers, Emily Bradley, Cordyn Flamm, and Landon Hammer) won their first match and advanced to the quarterfinals.

The Annihilators won again to advance to the semifinals to compete against the No. 1 ranked team from Utah and Sun Valley loaded with high school seniors. Although they put up a good fight, they lost the match.