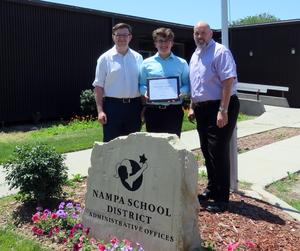 Braeden Watkins named No. 12 speaker in the nation in World Schools Debate.

Braeden Watkins, a May 2021 graduate of Columbia High School, was recognized by the National Speech and Debate Association as the No. 12 speaker in the nation in World Schools Debate. The award was given as part of this year’s virtual NSDA National Speech and Debate Championships, comprised of 836 competitors from 219 teams from across the U.S. and some international entries. Watkins will attend American University in Washington, D.C., in the fall, where he will focus on public policy.

World Schools Debate is a three-on-three format that combines prepared topics with impromptu topics, encouraging debaters to focus on specific issues rather than procedural arguments. Watkins’ team turned in the highest finish for a team from Idaho.

Nampa School District had nine students from Columbia and Skyview high schools qualify for the national tournament. The team is coached by Jeffrey Stoppenhagen, with assistance from former Worlds Team competitor Ben Smoldon.