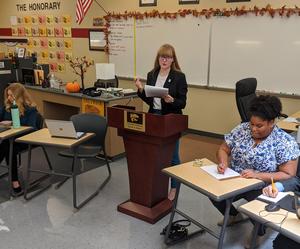 A strong speech and debate program has been building confidence and shaping character for almost 70 years.

Zac Efron did it. So did Idina Menzel, James Earl Jones, Janet Reno, Oprah Winfrey, and Antonin Scalia. In fact, competitive speech and debate has been credited, at least in part, for the success of individuals across industries and throughout the world.

In the Nampa School District, a strong forensics speech and debate program has been building confidence and shaping character for almost 70 years.

“Students learn skills in competitive speech and debate that they will use for the rest of their lives,” said Jeffrey Stoppenhagen, who has been coaching NSD students for the past eight years. “It gives them the ability to communicate with their family, their boss, or their significant other and prepares them to make good arguments.”

Stoppenhagen said the program appeals to a broad range of kids at Columbia, Nampa and Skyview high schools, including athletes, student leaders, cheerleaders, kids in marching band or theater, and those who may not have gotten involved in anything else in high school. Despite this diversity, or perhaps because of it, the program boasts a cohesive team environment where students hold each other accountable, resulting in better performance in the classroom.

The program has been highly successful, earning multiple championships, including three recent state titles in 2016 (speech), 2017 (debate) and 2019 (debate). In 2019, participant Elbie Seibert graduated as valedictorian before heading to Brown University on a full-ride scholarship. In spring 2020, senior Kasey Moulton qualified for nationals and was named among the Top 25 competitors in the nation. She is now competing at Whitman College.

“I know that I will take the skills debate has taught me – advocacy, community, leadership – and apply them to everything I do moving forward,” Moulton said. “It’s taught me the importance of coming together, how imperative it is to foster diversity, and the unmatched power that discourse has to shape our communities.”

About 155 students from the three high schools currently participate. While Stoppenhagen would love to see more championships and scholarships, his ultimate goal is simpler. “I hope they will say, ‘Wow! I learned something in Stoppenhagen’s class that I will use throughout my life.’”