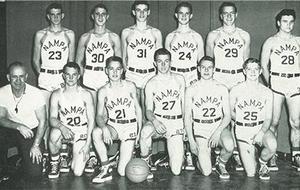 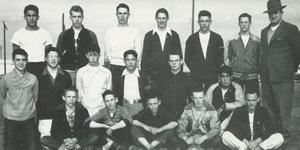 In 1949-1950, Nampa High School took state championships in football, basketball and baseball, and a district championship in boxing (there was no state competition).

The 1949-1950 sports season at Nampa High School marked an unprecedented banner year – state championships in football, basketball and baseball, and a district championship in boxing (there was no state competition). The Bulldogs racked up an impressive 58-1 record for the year, with only one loss in baseball to the Boise Braves.

That almost-perfect season captured the hearts, and headlines, of the community, county and state. Many of the players formed lifelong friendships and forged strong bonds in the community. Their record stood as the one to beat across decades of athletic competition.

Seventy years later, alumni from the classes of 1950, 1951 and 1952 are reuniting to celebrate “The Year of the Champions.” Former athletes and classmates from each year are invited to gather at the Dec. 14 Nampa High basketball game against Vallivue for pre-game festivities, a half-time Parade of Champions, and a post-game surprise presentation and reception for all classmates. Current student players will honor their predecessors with special warm ups and recognition.

“The 1949-50 school year resulted in accomplishments that haven't been duplicated before or since,” said Myron Finkbeiner, event organizer and player on the championship football and basketball teams. “Celebrating these successes can't help but give current Nampa student-athletes and our community a real sense of pride. However, present day students, school officials, and local sport fans, when quizzed, have no recollection of these successes from Nampa High School. There are very few of my former teammates still around who performed that year. I fear that if we don't reflect upon these past accomplishments now, they may become lost over time.”