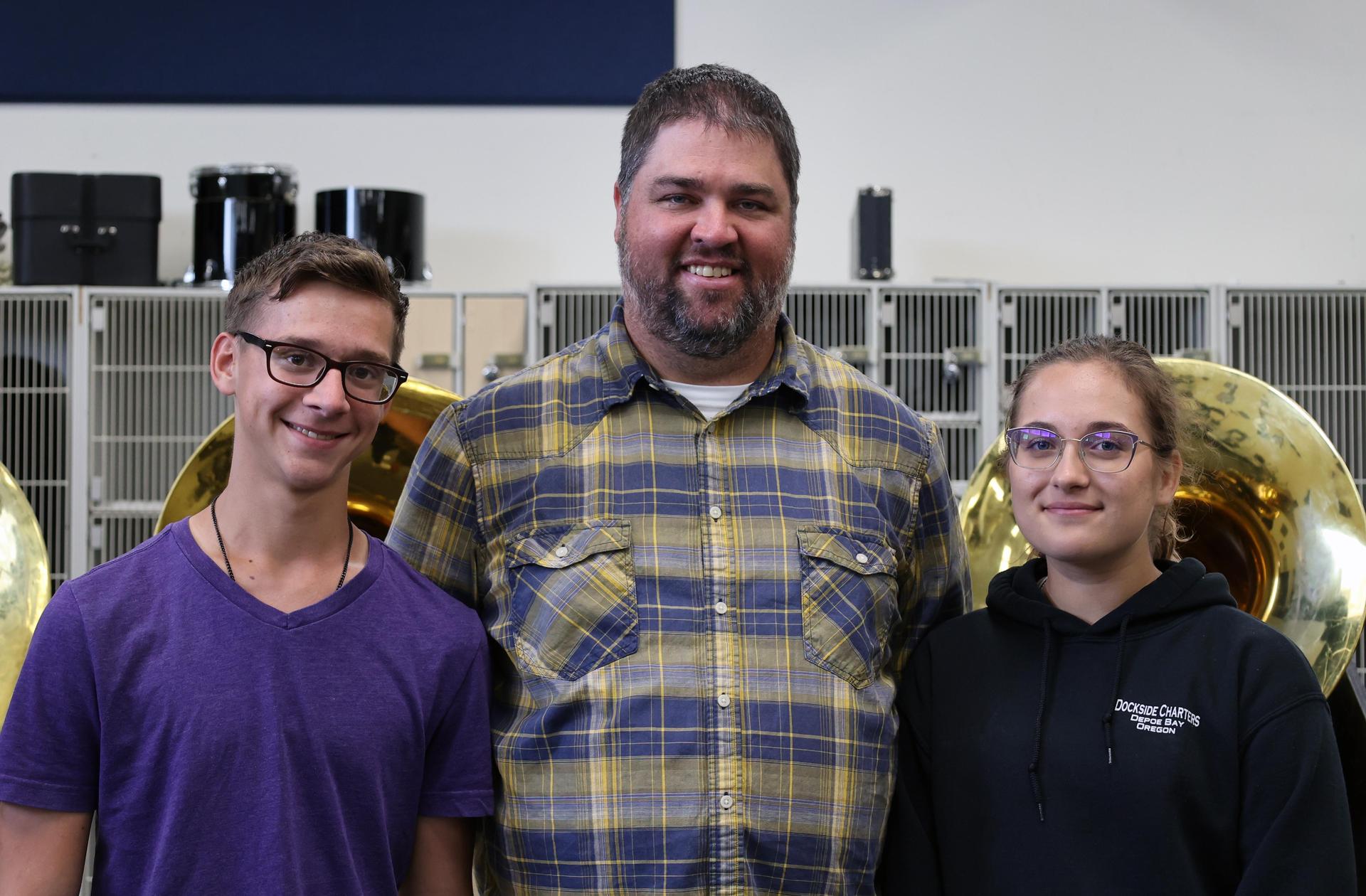 The Nampa High music teacher directs the school’s acclaimed marching band, which includes 101 musicians and members of the color guard. In addition, he teaches and directs the Symphonic Band, Wind Ensemble, Concert Band, three Jazz Bands and a music theory program. Oh, and he also teaches Drivers Ed. In all, the school’s band program serves about 180 students each school year.

Phil has been a staple of the NHS music program for 14 years and he can’t imagine doing anything else. At least, not anymore. He once had dreams of being a pilot and even accepted a full-ride scholarship to Minnesota State as an aviation major. But it took only one semester for him to realize his heart was really in music.

So, he transferred to Luther College in Decorah, Iowa. The liberal arts school is renowned for its strong music education program and outstanding music ensembles.

After graduating, he taught high school for a couple of years in Iowa. But after spending all of his money visiting family in the West during his breaks, he decided to move closer to his parents in Idaho. He just completed his Master of Music in music education from Central Washington University.

While Phil loves living in Nampa, he’s proud of his midwestern heritage. He grew up in the small town of Harlan, Iowa, as the youngest of five kids. He attended Harlan Community High School, where he was “super-inspired” by all of his band and music teachers. The school was known for its outstanding music programs and was a two-time state champion for jazz band while he attended.

“My experience in music and with my teachers, from elementary through college, really inspired me to teach,” he said.

That memory serves as a guide for his own teaching experience, where he counts his relationships with students and colleagues as the most rewarding aspect of his job.

“It’s about building relationships and watching kids improve and have fun over 4-plus years. It’s seeing them achieve at high levels and work to get better along the way. Watching their improvement and growth is satisfying,” he said.

Nampa School District has not only offered a great teaching experience, it’s also where he met his wife, Jaimee.

She was teaching sixth-grade reading at West Middle School and as a fellow Iowa transplant, offered to show him around. They met at Flying M, started dating and were engaged nine months later. Twelve years later they are the parents of two beautiful daughters – Julie, a kindergartner at Centennial Elementary, and 2-year-old Alice. Phil counts having them greet him when he gets home as the best part of his day.

He's also pretty inspired by Jaimee, whom he calls “incredibly compassionate and beautiful,” and by his parents.

“I’m intrigued by what it would have been like to live during the era when my parents came of age,” he said. “The ’60s were pretty major. So much change, and turmoil, obviously. There was Kennedy, MLK, the Vietnam War …”

Outside of spending time with his family, Phil loves the outdoors. He likes to hunt and fish, alpine ski and golf. Another perk of living in Idaho? “I’ve golfed and skied in the same weekend!”

If he had the opportunity, he wouldn’t mind doing some serious traveling. Thanks to his time performing in instrumental ensembles at Luther College, he’s already ticked off a number of popular travel destinations.

In addition to playing all across the upper and lower Midwest, he toured internationally three times, including a monthlong residency in Vienna, two weeks in the Dominican Republic and Puerto Rico, and two-and-a-half weeks in Japan and China. In 2008, he traveled as a faculty advisor for the Iowa Ambassadors of Music on a tour of London, Paris, Switzerland, Liechtenstein, Austria, Venice and Germany.

Despite all that travel, he says he can’t speak another language outside of high school French and a smattering of college Spanish. “I know just enough to make me confused in all the languages,” he said.

Although he counts his life as pretty blessed, he would like to tell his teenaged self to let go of perfection and be content with doing his best where he’s at. He’s grateful he eventually got there and is happy with his life and choices.

“I hope I’ll be remembered as a caring teacher, father and husband. Someone who works hard but has a sense of humor.”

Someone who understands the rhythm of life and takes time to stop and listen to the music. That sounds about right.