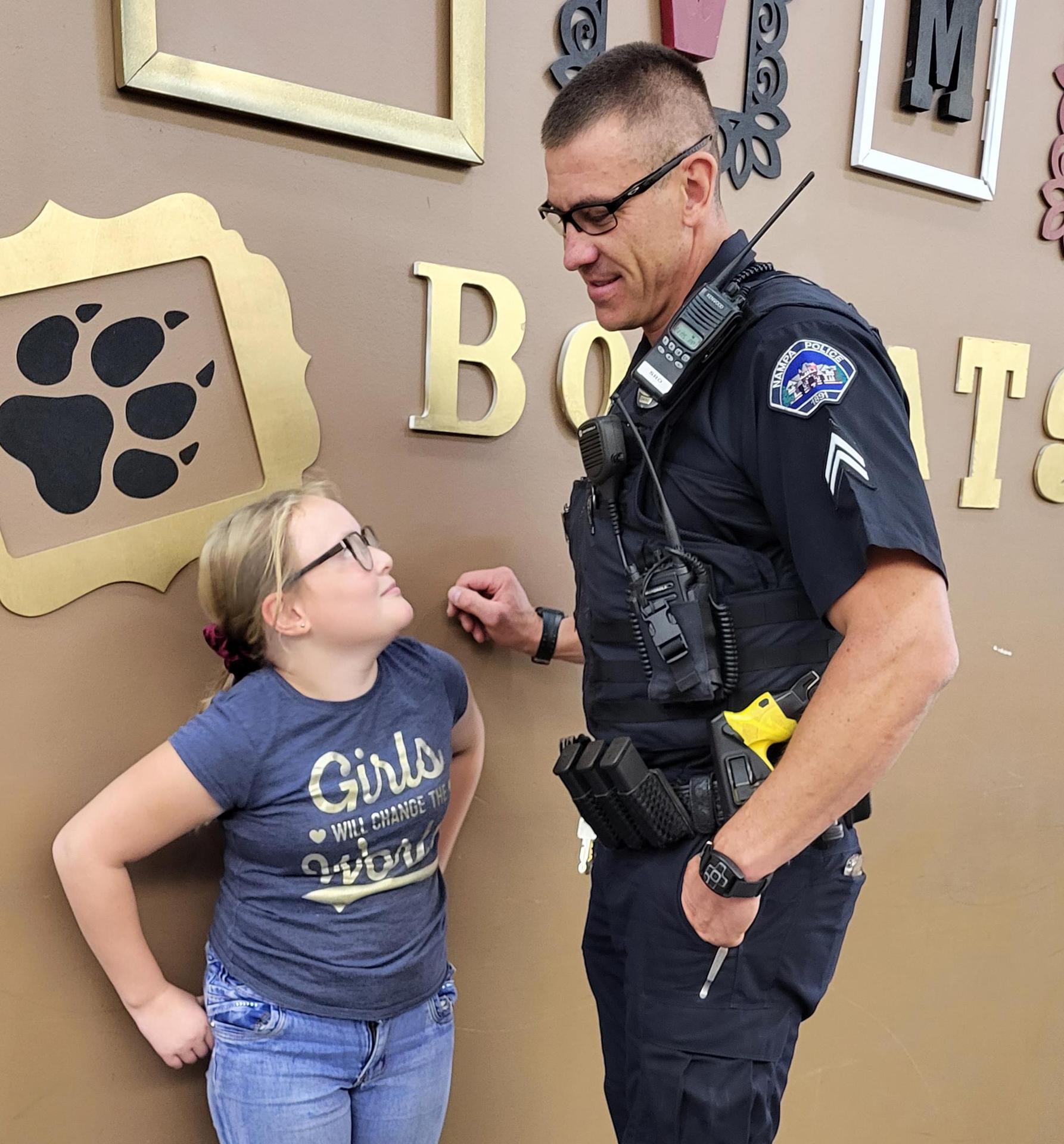 Corporal Jared Hoeksema has an important role at East Valley Middle School – giving kids someone to look up to. At 6’5”, he does that both literally and figuratively.

“Being a school resource officer is about directing kids to the right path and building relationships that last forever,” he said. “It’s some of the coolest work you’ll ever do.”

Jared has been a police officer for 11-and-a-half years, about half of those in Nampa. In his previous life, he operated heavy machinery as a supervisor for an excavation company. While he loved that work and continues to take side jobs here and there, he credits divine intervention and a downturn in the economy for his career change at the age of 29.

“I’ve always been attracted to helping other people,” he said. “I don’t ever want people to be victimized. I’m really a peacemaker and good at resolving conflict.”

As a police officer, he manages NPD’s LEAD (Law Enforcement Assisted Diversion) program for drug addiction in addition to his SRO responsibilities. LEAD’s focus on shaping a better path for offenders helped prepare him for the SRO job, which he launched last year at Nampa High School. It’s a post he calls both really challenging and really rewarding.

“It takes a community to help raise a child. And when kids fall short, it feels terrible,” he said. “Many police officers become jaded and don’t recognize it. This job opens your eyes to what we’re here to do. The badge is a public symbol of trust. It’s a lot of weight to carry.”

He said his own challenges as a kid uniquely qualified him to be an SRO. The child of divorced parents, he sometimes struggled to find his place. An “average” student who was often in trouble for not paying attention, he longed to get out of Fernley, Nevada, and a situation he calls “not great.”

“I’m in the perfect place now because of the situations I was in as a kid,” he says. “I can empathize. The things we endure in the past often put us on the right path.”

Outside the job, he’s a happily married father of two. He and his wife, Teri, have been married for 17 years. Together they parent daughter Gracie, 14, and son Graydin, 12, from a home they built themselves on 2.5 acres in Middleton. Jared was able to utilize his heavy machinery skills to excavate and pour the concrete.

And while he admits his kids aren’t perfect, he thinks they’re pretty close – mostly due to his wife’s influence.

“She’s the center of our home and existence,” he said. “I contribute the success of our family to her.”

For those who know Jared best, the horses are not a surprise. Despite that fact that as a kid a horse broke his femur and seriously injured his artery, almost killing him, he admits to a special bond with the animals. “I still love horses – I find them calming. They have almost a therapeutic effect.”

In fact, he dreams of having been born in an earlier time, eking out a living as a cowboy on a small-town ranch. “Life was simpler then,” he said, “with different morals and standards. There was a clearer set of rules – if you did this, the consequence was that.”

But he admits his life has been good even in this modern era. “I’m a very happy man and have been blessed with all that I have.”

If he hadn’t gone down the law enforcement path, Jared says he’d like to have become a pilot (a career path that speaks to his love of operating heavy equipment). Despite a healthy respect for heights, he would love to be an eagle, soaring over the beautiful land God created. And while his height would preclude a career as a fighter pilot, he is fascinated with the idea of flying a helicopter.

Asked what movie best illustrates his life, his answer might surprise some.

“Dracula Untold. It’s more of a love story than a horror story. It’s about a king who had to take on the power of a vampire to save his people. We take on the monsters of the world so others don’t have to and we have to deal with things others don’t want to see.

Well, maybe it’s not such a surprising answer after all.