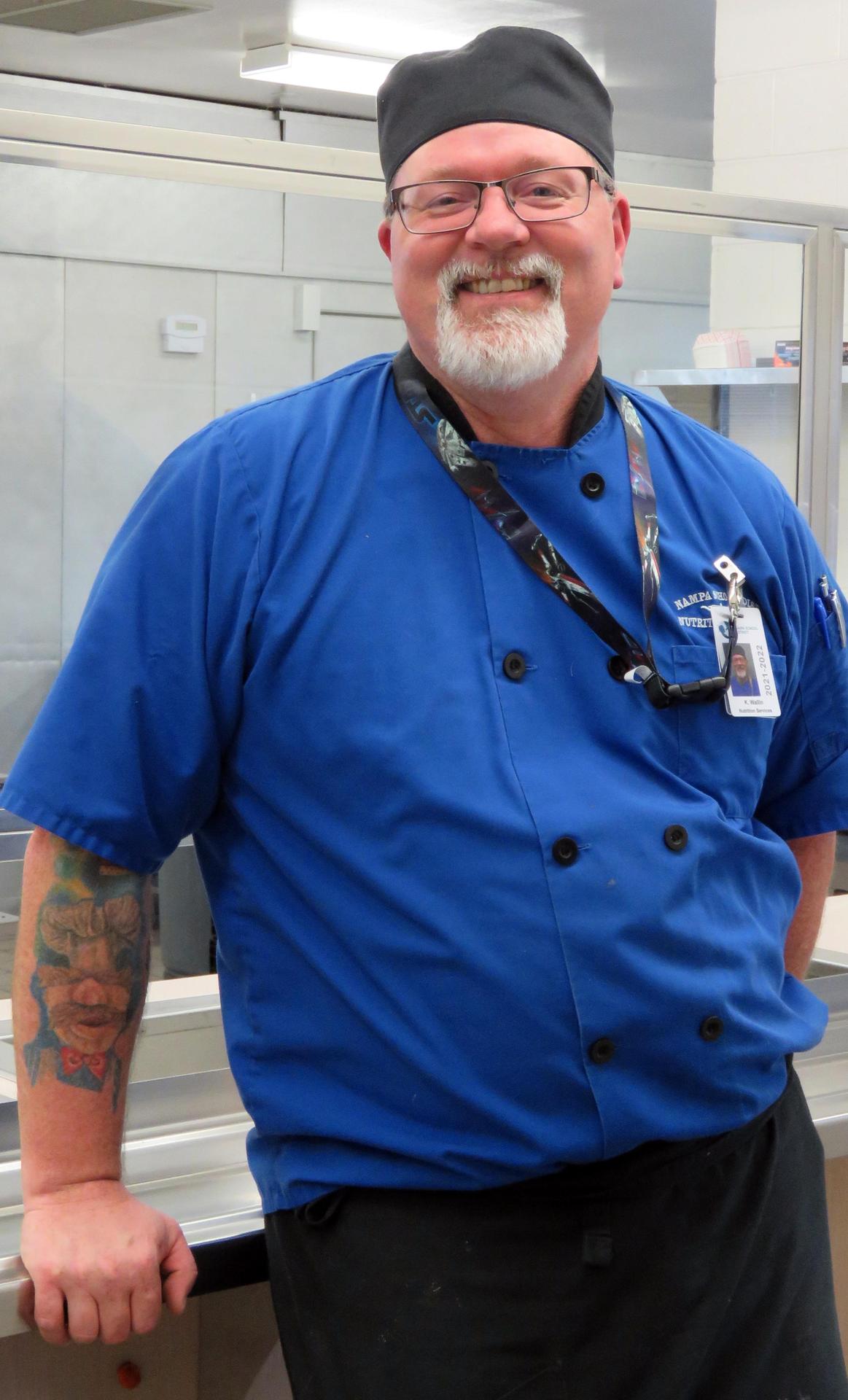 Tattoos are personal. They can recognize interests, honor loved ones, or simply reflect your favorite things. Kurt Wallin’s tattoo is a recipe for his signature Monster Cookies, made with peanut butter, oats, chocolate chips, M&Ms and no flour.

“My passion is baking,” says the trained pastry chef, with a bright smile. Cream puffs, croissants, wedding cakes … “If I could afford to do it, I’d bake anything for anyone who asked.”

Kurt is a 21-year veteran in NSD kitchens. He started down that path with a job in Marriott’s food services while he was a liberal arts student at Northwest Nazarene College (now NNU). From there, he went to work for a high-end pastry shop in Boise, where he earned his sous chef certification and received training as a pastry chef. Eventually, he found his way to Nampa School District’s Nutrition Services.

His first NSD assignment was West Middle School, followed by stints at Park Ridge, Columbia and Treasure Valley Leadership Academy. He currently is a supervisor at Sherman, overseeing all aspects of food production in the kitchen as well as educating kids on good nutrition and parents on reimbursable meals, food guidelines and federal rules.

But while paperwork and management duties keep him on his toes, his relationship with students keeps the job rewarding. He originally hoped to become a teacher, but that didn’t pan out.

“This is the next best thing. I love interacting with students.”

Kurt finds nothing more rewarding than an elementary kid who stops to thank him and tell him the food was “really good” or a high schooler who takes a moment to chat. He also treasures watching students grow up and having the opportunity to feed their now school-aged children.

“Sometimes I’ll see someone and they’ll say ‘I know you! You fed me. Now you feed my daughter.’ It’s a circle. They remember conversations we had and what I taught them about nutrition.”

Serving others, especially through an education lens, runs in his family. His wife of 29 years, Andrea (whom he calls his “stability”), is a second-grade teacher at Park Ridge. Rounding out their family is 28-year-old son Scott, a banker at First Interstate in Meridian, Milo, a 2-year-old pound puppy, and Cooper, Scott’s 10-year-old dog.

Kurt’s passion for education extends to Sundays, when he teaches an adult Sunday School class for his Nazarene church. He’s been teaching the class long enough that members have watched each other’s children grow to adulthood and are like family to him. The church itself is woven tightly into his being – “I was practically born on the first pew of the Nazarene Church,” he says.

As a kid, when he wasn’t at church he could be found playing football, running track or singing in the school choir. He also has fond memories of German class, where his teacher immersed them from day one in a “German-only” classroom environment.  “It was all conversational German,” he recalls. “I can still read it well and understand some of it. I can’t really speak it.”

He did get to use some of those German classes on a trip to Germany, Hungary, Switzerland, Austria and the Czech Republic in 1991, just after the fall of the Berlin Wall. His favorite memories are tied to the area’s many historic buildings and fairy tale villages. He’d love to return one day to visit old landmarks and the storied music houses of Bach and Beethoven.

Those who know him best know he does his best to get along with everybody. “I’m a happy, joyous person and try to be at peace with the world,” he says.

But it wasn’t always that way. When he was 16, he suffered from what he called teen angst and was angry a lot. “I even broke a couple of things. My dad sat me down and said the anger would get me in trouble one of these days.

He knew he needed to change or he’d end up destroying something he couldn’t replace.

“Be at peace with yourself,” he says, “and it will make your life easier.”