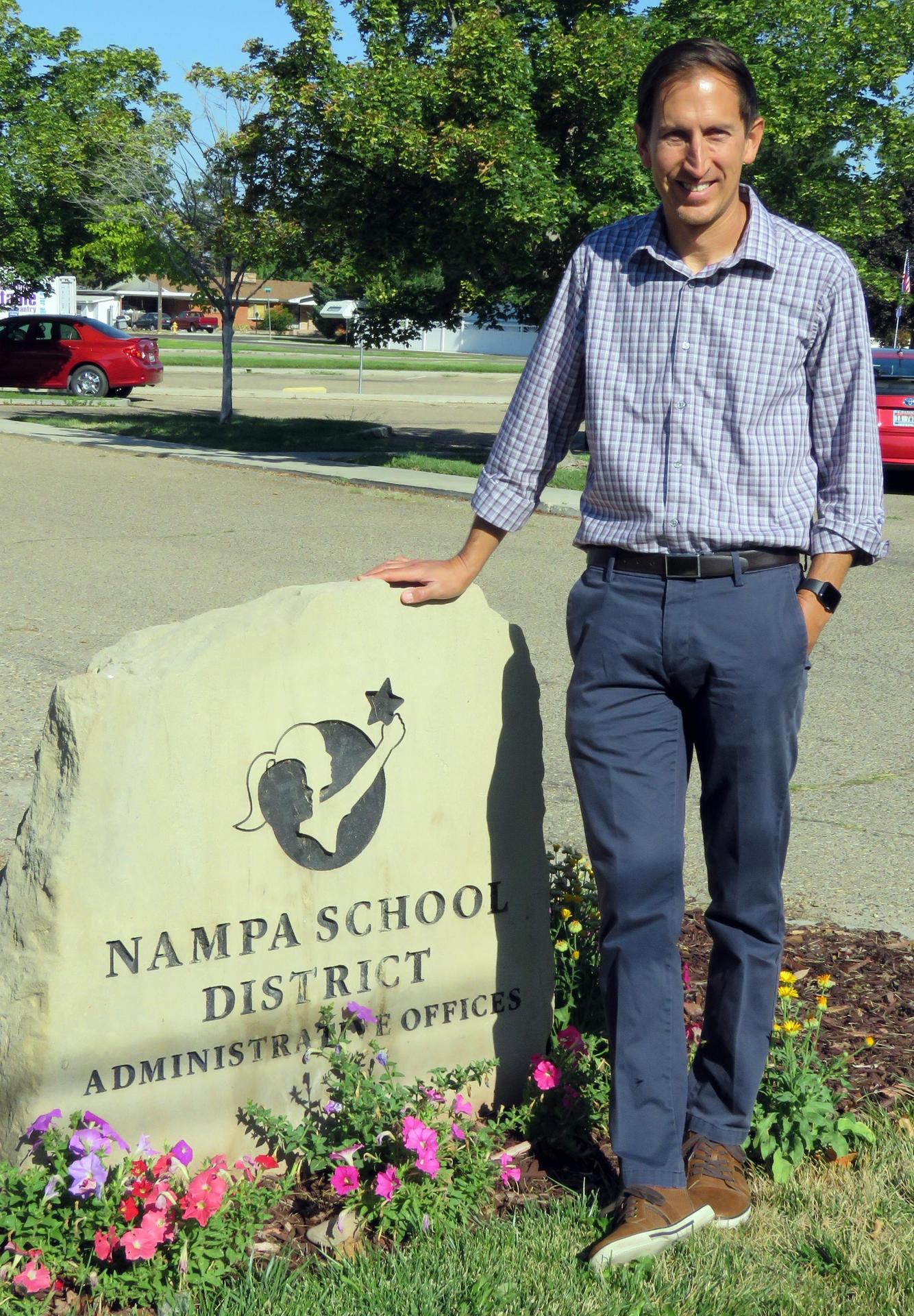 Some people know at an early age what they want to be when they grow up. Not Justin Pickens.

“I didn’t plan to teach until my senior year of college,” he said. “I was in youth ministry.” But working as a children’s pastor led to getting credentialed and teaching preschool while working at his church. That got him thinking.

“I realized I could make an impact on kids wherever I was.”

Justin is now entering his 18th year in the field of education, and his fifth year working for the Nampa School District as an instructional specialist.

Justin works as part of the district’s Curriculum and Instruction team, supporting training and new teacher and instructional coach support while helping teachers make sense of initiatives around instruction. His content area centers on math – secondary math in particular.

Justin began his career in Garden Grove, California, but moved to the Treasure Valley because his wife is from this area. The couple have two daughters, ages 6 and 4, and appreciate the mountains and other outdoor opportunities the area offers their family.

The outdoors has a special appeal for Justin, who says his dream job is to be a photographer for National Geographic so he could visit new places around the world. It’s a bit of a stretch because he doesn’t really understand the technical elements of the job (what is “aspect” anyway?), but he’s confident he would be a quick learner.

Although he’s fascinated with math – he refers to himself as a math geek – he could also picture himself as a U.S. history teacher, or maybe one day a tour guide. He loves learning more about the colonial American era, with its wide-open spaces, more cordial social norms and sense of community and purpose.

And at the risk of sounding too stereotypical, he’d truly love to sit down with Alexander Hamilton and pick his brain for a while. “I’d love to learn more about his crazy life and how he became who he was.”

But then, Justin is full of surprises. Most people would rightly guess that as a kid he was the teacher’s pet – you know, the kid who got good grades, earned the Presidential Award (signed by Bill Clinton) and always had his hair combed and shirt tucked in. But did you know that he likes to get down and dirty learning to ride his mountain bike? Or that since learning to roast his own coffee beans he’s become a bit of a coffee snob? He has a special coffee roaster the size of a toaster oven and buys his beans online from a supplier in Orange County. “It’s hard to drink coffee any other way now,” he said.

He believes that life is good (“I’m totally amazed that I have two girls who are growing – we don’t know how we are doing it as parents.”) But if he could score a redo on something, he’d strive to be more honest with his teenage self and those around him. He recalls how hard it was pretending it was all OK after his parents’ divorce to make it easier on his three younger brothers.

Despite those rocky years, he lists his dad as the biggest influence in his life. “When things got hard, he pushed through them.” He was also inspired by his youth pastor, who knew how to relate to high school kids and loved them, “no matter who you were or what you did.”

Want to learn more about Justin? Give him a call and sit down over a cup of freshly roasted coffee. You might be surprised where your conversation leads you.