Below is a recap of the Nov. 13, 2018, Nampa School Board meeting. Supporting documents can be found at www.boarddocs.com/id/nsd131/Board.nsf/Public .
CALL TO ORDER
The meeting was called to order at 6:30 p.m. In attendance were Chairman Allison Westfall and trustees Heather Lewis, Janelle Stauffer, Mandy Simpson and Kim Rost. 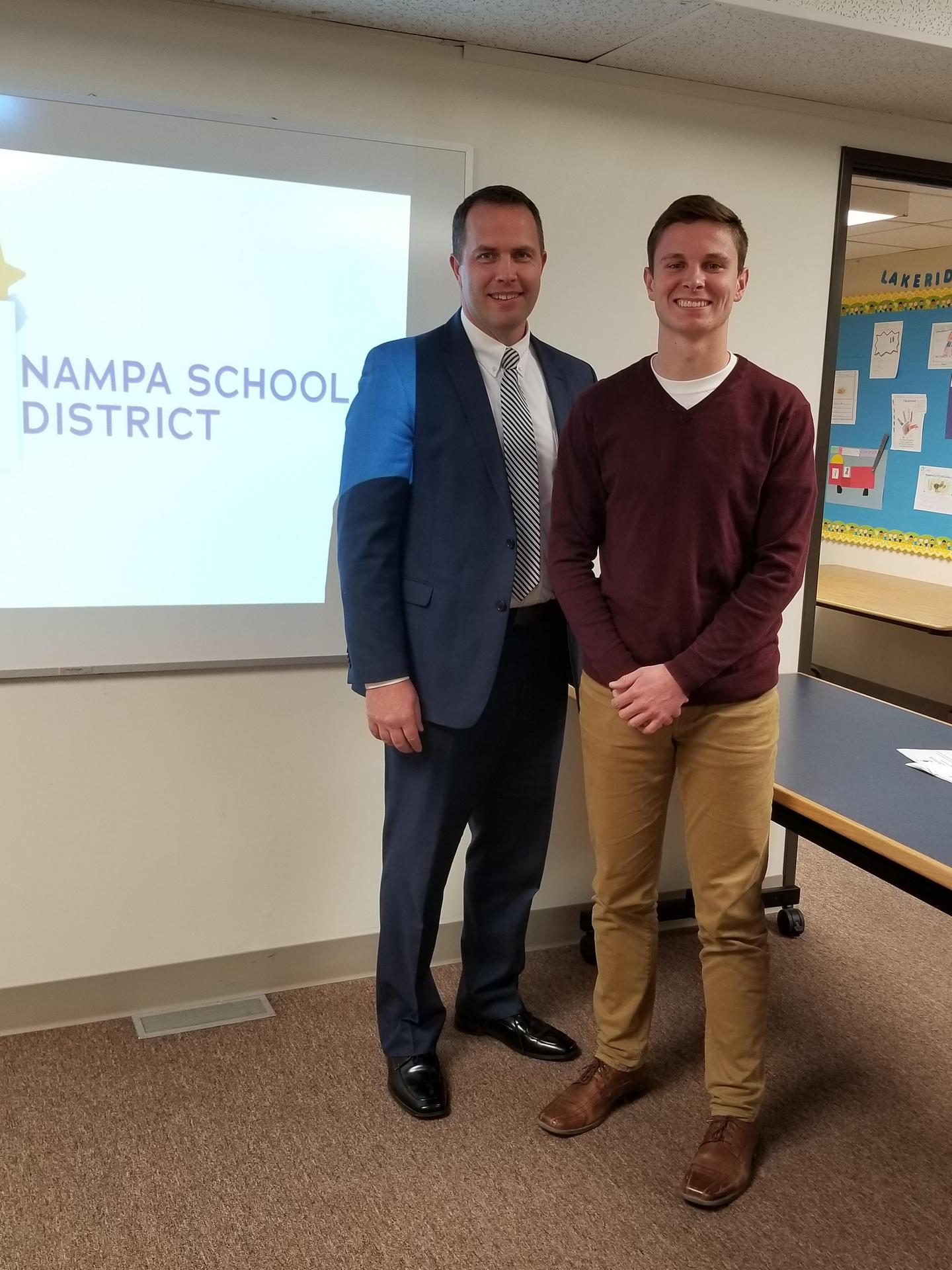 Student Spotlight: Isaac Hansen (pictured above with Principal Woolstenhulme), a senior at Columbia High School, spoke about Youth Activation, where students partner with adults to learn how to lead and make a positive difference. He and fellow senior Susan Waskosky attended the Youth Activations summit held last year in San Francisco. This year’s goal was to help freshmen become more actively involved. They began by creating a social media platform directed at students, and worked with East Valley Middle School eighth-graders who would be coming to Columbia High this year. They also put students on leadership teams. So far, they have seen greater involvement by freshmen at assembles, an increase in attendance (94 percent), and they have 700 followers on social media. Next year two current juniors will take their place leading the project.

Student Support Group Comments: Megan Roberts from Lake Ridge PTA informed the board of the group’s experiment in fundraising. Instead of having students participate in fundraising, they are stepping back and refocusing traditional fundraising events on students. The annual jog-a-thon focused on a month of running and included awards promoting healthy lifestyles. The PTA recently purchased a gaga ball pit for students to further this goal. The upcoming read-a-thon will similarly not include pledges but will focus encouraging kids to read. In lieu of fundraisers, parents are being asked to support the organization with cash donations.

Nampa Education Association Comments: Veronica Maple, vice president of the NEA, thanked the district for their work toward a new collaborative bargaining effort to replace traditional contract negotiations for teachers. She also said she was pleased that teachers had been included in the calendar committee that will create the upcoming school year calendar. Finally, she noted that the move toward standards based grading could be a difficult transition. The NEA is committed to supporting teacher training on this change.

Trustee Comments: Trustee Kim Rost reported on the progress of the Graduation Requirement Committee. Four of an anticipated 14 or so roundtable groups have met. She also mentioned the possibility of a survey being created for those who could not attend a roundtable. Trustee Janelle Stauffer reported on the work of the committee to create a trauma response team. They are creating an MOU and recruiting volunteers. She believes this will be a great safety net for the district. Trustee Heather Lewis met with the Behavioral Health Impact team. The group discussed their goals and funding subject matter experts. She also attended two Veterans Day assemblies (at Skyview High and Lake Ridge Elementary) and expressed how much she appreciated those as a veteran. Chairman Allison Westfall reported on the Schoolhouse Committee. Members of the business community met to go through the district’s comprehensive plan and provide feedback. She also met with Eric Heringer with Piper Jaffray to get better insight on levies. And she visited Lake Ridge Elementary for a tour of student project based learning.

CONSENT AGENDA
The following consent agenda items were approved by the board.

Elementary Benchmark Assessments Update: Justin Pickens, instructional specialist, presented an update on the benchmark assessments for grades 3-5. The assessments are used to identify strengths and assess areas of needed growth, and allow teachers to see student progress. Next steps include working with professional learning communities on plans for how they are using their data, working with middle schools on plans to administer additional interim assessment blocks (IABs), and preparing to do the first of two common math IABs in high schools.

Standards Based Grading Committee Update: Assistant Superintendent Gregg Russell reported on the committee looking at implementing standards based grading. SBG allows educators to give strong feedback on student progress and helps ensure equal assessment across the district. SBG better reflects student mastery compared to current letter grades, which often include extracurricular credit for soft skills. The committee is addressing questions of how grades will be assigned and how they will represent mastery of the subject.

Graduation Requirement Committee Update: Scott Parker, executive director of secondary education, reported that this committee has met twice and includes a variety of stakeholders. The group has looked at what requirements are already out there around the state, and also talked about a possible change in student schedules. The committee is reaching out to get feedback from a variety of populations through roundtables. No recommendation will be forthcoming until April at the earliest.

High School Schedule Update: High school principals Diana Molino, Cory Woolstenhulme and Will Barber spoke about proposed changes to the school schedule, such as going to a trimester model. They are looking at possible barriers to student success and how those could be overcome. They also are looking at how a change could affect programs such as AVID and STEM Academy, as well as mental health services, new curriculum, Nampa Personalized Learning (NPL), professional development opportunities and Positive Behavior Interventions and Supports (PBIS). Currently, the block schedule is creating challenges for some students. A new schedule could provide more options for students and improve outcomes. As an example, they reported that Nampa High school currently offers 900 sections. The school could offer 1,125 with a trimester schedule. The group visited Emmett and Bonneville, which currently are using a trimester system.

Approval of Annual Audit: Chairman Westfall noted that the auditors had positive feedback. She also said the district will need to continue to communicate with the community about how our levy funds are being spent. The audit was approved.

Levy Discussion: The district is doing a thorough review of its existing facilities needs. Superintendent Kellerer noted that the district will need to be mindful of the College of Western Idaho’s plans, as we do not want to have two levies on the ballot at the same time. The board will revisit this in January.

National School Boards Association Conference: This national conference will be held in March in Philadelphia. The district has budgeted for two staff members (the superintendent and the board clerk) and two trustees to attend. Trustee Stauffer and Chairman Westfall expressed a desire to attend if their schedules allow. Trustee Simpson said she could attend if others could not.

Monthly Budget Status Report: There were no questions on the monthly budget status report.

First Reading of Policy #3570 – Student Records and Release of Student Directory Information: This policy was approved for a first reading.

First Reading of Policy #3430 – Distribution of Fund Drive Literature through Students: This policy was approved for a first reading.

First Reading of Policy #3440 – Student Fees, Fines, and Charges/Return of Property: This policy was approved for a first reading.

Superintendent’s Report: Superintendent Kellerer said she was pleased to work with the Nampa Education Association on collaborative bargaining. She reported that the Schoolhouse Committee has now met three times. They are well versed on data and the school improvement plan, and are shaping a partnership on an item that makes sense to them based on data. She noted that members are key leaders in the community.

Legal Report: Attorneys from the districts official counsel, Hamilton, Michaelson and Hilty, LLP, reported they are working with Human Resources on personnel issues, and are involved with other projects throughout the district. They also said they planned to attend the Idaho School Board Association convention in Boise this week.

Trustee Comments: Trustee Lewis said she is looking forward to seeing personalized learning in action at a couple of locations. Trustee Stauffer said she is pleased with the new method of evaluating the superintendent.

Adjournment: The board recessed into executive session at 8:22 p.m. and resumed open session at 8:34 p.m. to approve a student discipline issue and uphold a personnel action. The meeting adjourned at 8:36 p.m.