Below is a recap of the August 14, 2018, Nampa School Board meeting. Supporting documents can be found at https://www.boarddocs.com/id/nsd131/Board.nsf/Public.

The meeting was called to order at 6:30 p.m. In attendance were Chairman Allison Westfall and trustees Heather Lewis, Janelle Stauffer, Mandy Simpson and Kim Rost.

Public Hearing – Lunch Price Increase: Nutrition Services Director Sheila Keim reported that due to a change in boundaries created by the annexation of a small section of the district to the Vallivue School District, some schools that previously received free lunch for all students no longer qualify for that federal program. Lunch prices for students who do not qualify for free or reduced lunch is $2.25 for elementary and $2.50 for secondary. 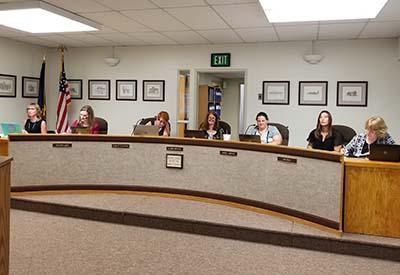 Trustee Comments: Trustee Rost commented that she and other parents appreciate being able to pay fees online, and that the fee for activity busing had been eliminated (thanks to the levy). She also was happy to see updates to the district website. Trustee Stauffer reported that the Kindness Fair is Sept. 29 and that the committee is looking for vendors to participate. She also reported on Southwest District Health’s Trauma Response Network. Trustee Lewis said that she had a conversation with Jean Fitzgerald-Mutchie from St. Luke’s Health System regarding a health initiative.

CONSENT AGENDA: The following consent agenda was approved by the board.

Discussion of Continuous Improvement Plan: Superintendent Paula Kellerer reported on a recent retreat for district administrators. A focus of the retreat was to take a deeper look at how the Continuous Improvement Plan reflects who we are as well as who we aspire to be, and align those ideas with our seven strategic areas. She would like to get this in front of patrons for feedback before sending it to the State Department of Education by the Oct. 1 deadline. The board suggested posting it on the district webpage, and/or sending it out via Peachjar. Trustees discussed where they felt wellness fit in the overall plan. There was discussion that it should fit in area 7 and could only happen with community engagement.

Student Achievement Update - Idaho Arts Charter School Review: Jackie Collins, principal of Idaho Arts Charter School, presented an overview of the school’s focus and current highlights. She noted that the school has had a strong partnership with the Nampa School District for 14 years. The school has grown from eight portable buildings to almost 1,200 students on two campuses, graduating about 50 students per year. IACS also uses a lot of technology and strives to be a one-to-one school.


Student Achievement Update - Gem Prep Charter School: Stacy Walker, principal of Gem Prep Charter School, highlighted the school’s achievements over the past two years. Gem Prep, which has shared space at New Horizons Dual Language Magnet School since 2016, is moving to its new location on Iowa Avenue this fall. The newly accredited school has 372 students enrolled this year in grades K-6. The new building was designed to accommodate grades K-12.

Action Item – Repeal ISBA Resolution in Support of Boise School District’s Resolution: The board voted to repeal a resolution crafted earlier this year in favor of supporting a resolution from the Boise State District.

Action Item – Superintendent Compensation: The board voted to increase the superintendent’s salary by 2 percent and to extend her contract to 2021.

Monthly Budget Status Report: Finance Director Randy Dewey reported that the district incurred more expenses last year than revenue received from the state. However, he anticipates that due to planned carryforward funds, the district will end the year in the black.

Chairman Westfall confirmed that the circumstance that caused the district to overspend does not exist in the current year budget. Randy stated that the district has right sized to correct the issue and created a budget with a 675 unit forecast. Last year’s forecast was 699, with 681 actual units earned. An audit committee will begin meeting after Labor Day; Trustees Rost and Westfall will represent the board on the committee.

Second Reading Revised #1200 Annual Organizational Meeting: The policy was approved for a second and final reading.

Second Reading Revised #7230 Financial Reporting and Audits: The policy was approved for a second and final reading.

Personnel Policies: Superintendent Kellerer noted that the next group of policies to be revised are related to personnel. Trustees Simpson and Lewis will help with those revisions. No board action was taken.

Nampa Education Association Comments (moved from earlier in the agenda): NEA President Eric Maine introduced NEA Vice President Veronica Maples. He shared that he was pleased that a tentative agreement was reached on the Master Contract before the start of schools and said he was looking forward to ratification. He noted NEA concerns regarding declining enrollment projections and the loss of more experienced teachers. However, he shared that he also is full of hope for the new school year. He said the NEA and IEA are pleased to offer professional development for teachers and that his team is excited to bring solutions to the district.

Superintendent Comments: Superintendent Kellerer shared that announcements are coming from the State Department of Education. She anticipates that several schools in the district will be noted for academic improvements. Union High School will participate in an improvement process this coming year due to graduation rate. She also invited the board to attend the keynote address at Thursday’s (Em)Powering Up PLCs event. She updated the trustees on the work of several committees, including the calendar committee. The high school schedules committee has begun work and the graduation requirement committee is about to begin work.

The high school bell schedule has been revised for the 2018-2019 school year to allow for the opportunity for intervention time while still meeting the state’s seat-time requirement.  She also reported that schools will participate in the Kindness Festival the week prior to the community event on September 29th. Administration is working with staff and students for planning.

The next issue of the Superintendent’s Voice will come out early next week. This issue includes dates of events to be aware of in the next few weeks. Greg Carpenter has been hired as a vice principal at Nampa High School, filling the last administrative vacancy. The district is still working to fill some certified and classified openings.

Upcoming Meetings: The next regular board meeting is at 6:30 p.m. Sept. 11. A work session is scheduled for Sept. 25.

Executive Session - Personnel Issue & Negotiations: The board recessed to executive session at 7:25 p.m.

Adjournment: The meeting adjourned at  7:50 p.m.