Below is a recap of the July 10, 2018, Nampa School Board meeting. Supporting documents can be found at https://www.boarddocs.com/id/nsd131/Board.nsf/Public.

Report and discussion of the Communications Audit and Facilities Committee.

The meeting was called to order at 7:30 p.m. In attendance were Chairman Allison Westfall and trustees Heather Lewis, Mandy Simpson and Kim Rost. Trustee Janelle Stauffer joined by phone.

Nampa Education Association Comments: NEA President Eric Maine share the newly drafted vision and purpose of the NEA and said he is looking forward to working with the board and others at the district.

Student Support Organization Comments – Idaho Power Incentive Presentation: Rudy Beltran and Jake Perryman from Idaho Power presented an incentive check for $59,033.80 for energy conservation efforts at East Valley, West and Skyview in 2017 that resulted in a savings of more than 450,000 kilowatt hours. Since 2007, the district has saved 7.2 million kilowatt hours and earned incentives of $1,052,852.47. 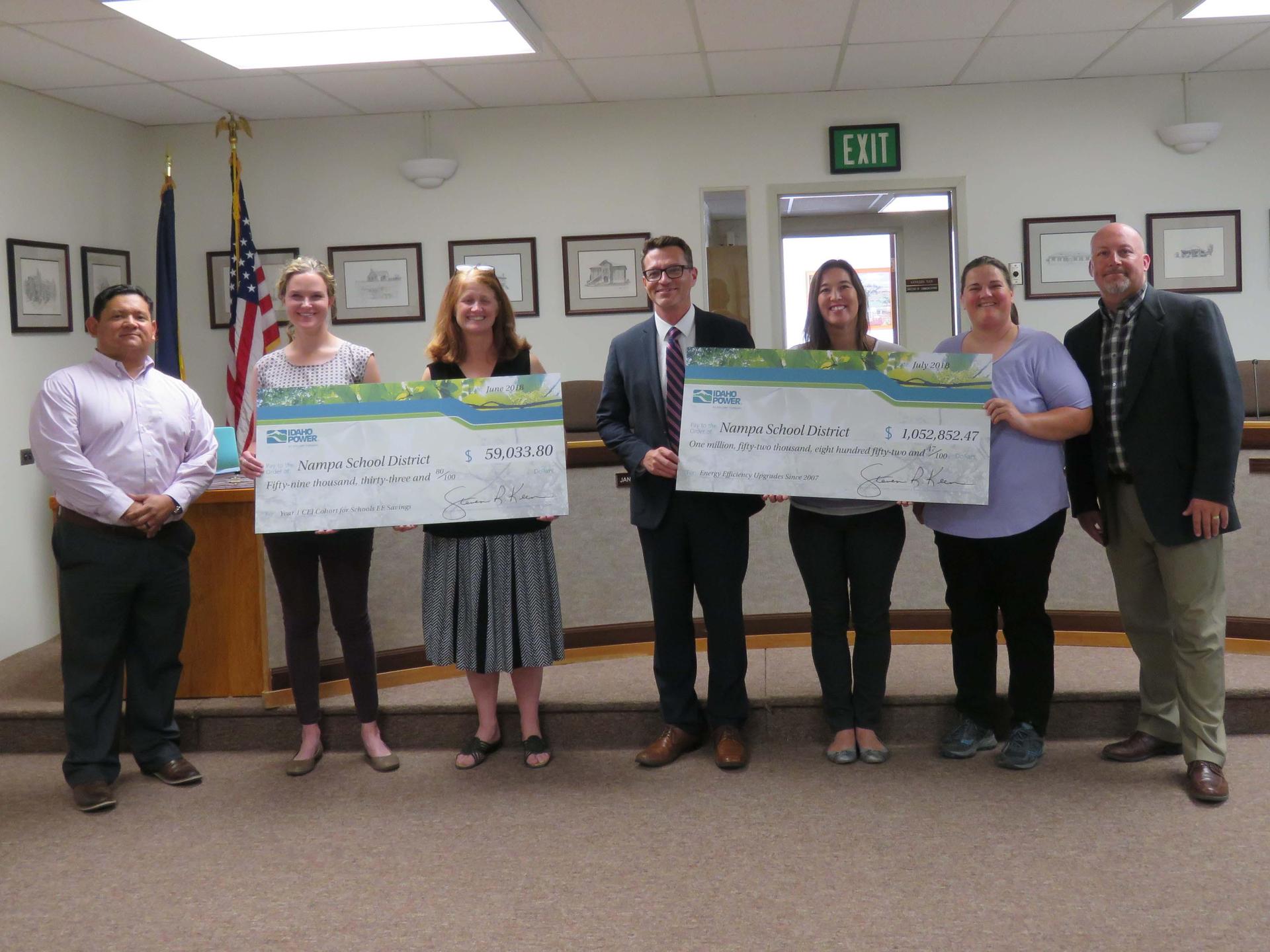 Trustee Comments: Trustee Janelle Stauffer reported on the significant progress being made by the Student Assistance Task Force. They are recruiting volunteers and moving forward. She also is helping to organize the Kindness Festival slated for Sept. 29 to bring the community together. Chairman Westfall reported that she attended the Twin Falls public comment session on the funding formula and reminded everyone that the next meeting will be live streamed beginning July 18 (beginning at 9 a.m.).

The following consent agenda was approved by the board:

Heather Lewis was sworn in as the new Zone 5 Trustee. Allison Westfall was re-elected as chair, and Janelle Stauffer was re-elected vice chair. Tammy Wallen will continue as clerk and Randy Dewey as treasurer. Trustee Stauffer then signed off. 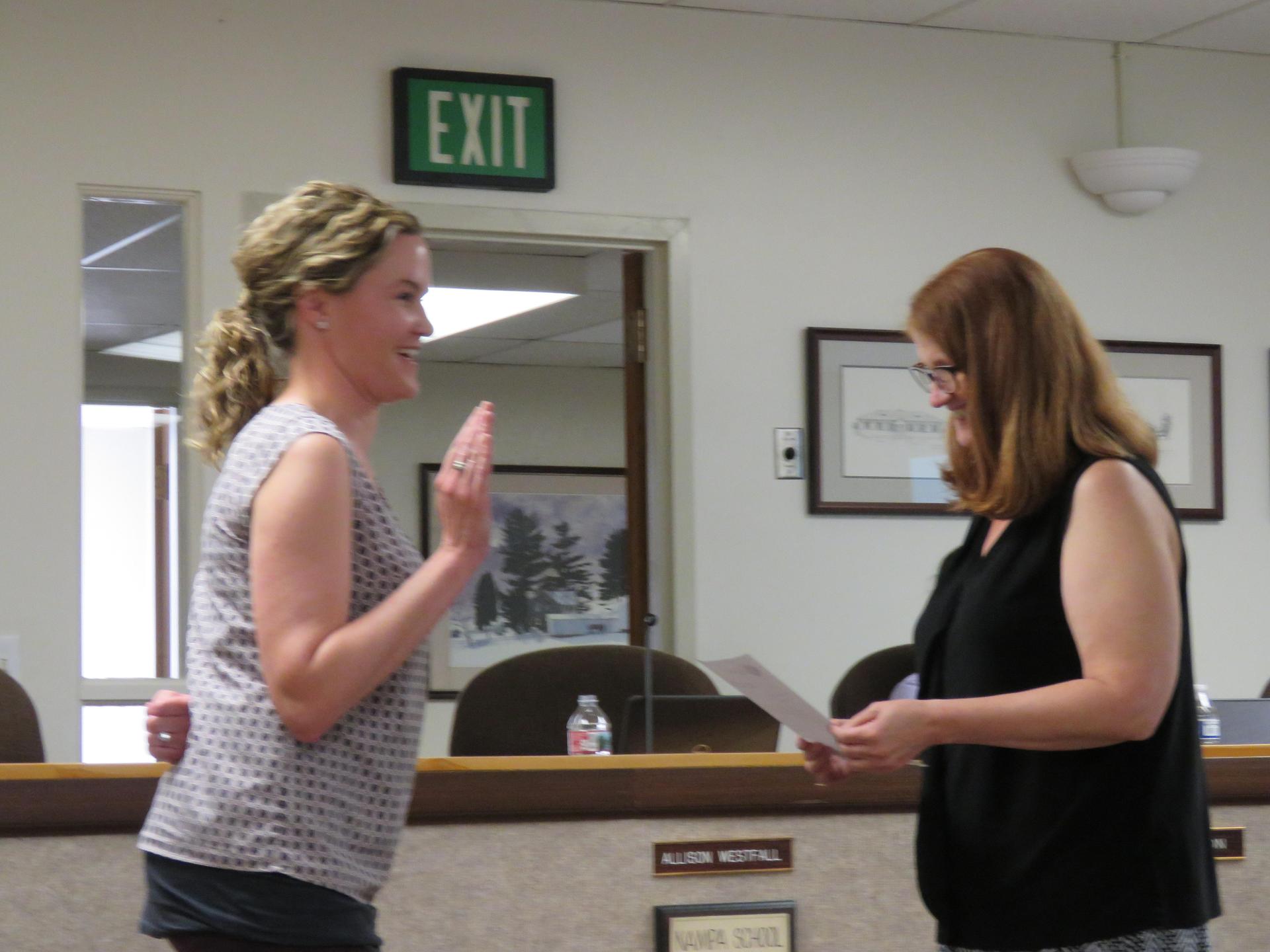 Student Achievement Update - Pathways in Education: Principal Susan Lux reported that the school offers college prep classes and is not the “easy path” some think it is. Of the three students expected to graduate out of the first cohort, one graduated from PIE, one returned to their home school and graduated and the third is continuing and expects to graduate next year. She reported that some support staff and special education positions have been difficult to fill. The school is governed by a board made up of a district representative, a representative from Bluum, and community members.

Facilities Committee Update: Assistant Superintendent Gregg Russell reported that a district committee worked with Cooperative Strategies on an enrollment projection for 2018 forward. The study projects a decline over the next 10 years. The birth rate in Nampa is dropping, as is the under-5 population. Recommendations include no new construction, but continued maintenance and upgrading on existing facilities; consideration of a committee to review boundaries and the possibility of taking a building offline; and exploration of the most efficient use of our buildings.

Student Occupied Building Use Committee Creation: Gregg Russell reported that the aim of a building use committee would be to identify options to maximize the use of current facilities and the effects of consolidation on patrons and the student experience. The board elected to table the proposal for a month to help better understand the vision of the committee and scope of work.

Review and Discuss Policy #1600 Board Members’ Ethics and Conduct: Trustees reviewed and signed the policy, which they do annually.

Appoint Legal Counsel: Current board attorney Bud Yost introduced attorneys from White Peterson law firm, where he will be joining as counsel in September. Attorney Matt Johnson answered trustee questions regarding their proposed contract for services. Their proposed retainer rate is $1,800 per month. Larger issues that go beyond general questions would be charged regular rates. The board asked that the contract approval be held until next month.

Set Regular Meeting Date: The board approved the meeting date schedule for 2018-2019. https://bit.ly/2uthFp0

Monthly Budget Status Report: Trustees had no questions about the monthly budget report.

ISBA Resolution Support: The board elected to join a resolution by the Weiser School District supporting more state funding for classified employees.

Reconsideration of ISBA Resolution: Chairman Westfall reported that the current thought on the board’s resolution asking for non-restricted training funding is that it would garner membership support but not pass in the Legislature. She also reported that Caldwell School District has joined in supporting the resolution. The decision on whether to advance with the resolution will be on next month’s agenda.

Superintendent comments: Assistant Superintendent Gregg Russell reported that Nick Stern has been hired as the new principal at Greenhurst Elementary. There is an opening at Nampa High School for a new vice principal. Human Resources Director Rachelle Armstrong is stepping down and the district is working on a transition plan. An administrative retreat is planned for Aug. 6-7, focusing on leadership and direction. He also reminded trustees that a special board meeting is needed to deal with a personnel issue.

Trustee comments: Trustee Lewis expressed appreciation for the district’s assistance in streaming her swearing in so family members could participate from a distance. Trustee Simpson welcomed Trustee Lewis to the board. She also emphasized the importance of trustees getting out and talking to people. After learning about the needs in the McKinney Vento program, she placed a few phone calls and was able to get help from friends and family. Trustee Rost commended the district on planning a retreat to come together. She said she is excited to have Trustee Lewis on board, and for the chair and vice chair for the coming year. She said she would appreciated getting to know those in key leadership roles and suggested that when administrators leave the district they receive an invitation to an exit interview with a board member. She is excited about additional meetings each month. Finally, she asked that the board not be expected to vote on information they may have just learned about in a presentation. Chairman Westfall said she would appreciate having information in the board packet as soon as possible.

Upcoming meetings: The next regular meeting is at 6:30 p.m. August 14.

Adjournment: The meeting was adjourned at 10 p.m.